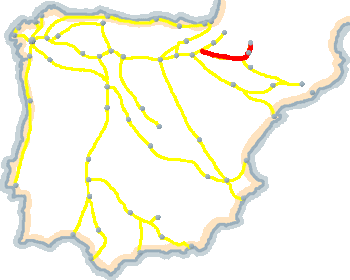 ITINERARY
Camino Aragones
The towns through which the way passes, the partial km, the total km, wether there is a hostel, ... and download it for free in a PDF file !!!

STAGES PLANNER
Camino Aragones
Plan your way choosing the section you want to do and your stages. Download your planning of stages and the complete list of locations of the chosen stretch for free!

STAGES PLANNINGS
Camino Aragones
Stage plannigs that can help you. Download the stages planning and the microguide for free!

It is thought that, in the tenth century, the most important pass to reach the Iberian Peninsula through the Pyrenees was in Puerto del Palo, following an old Roman road. When the city of Jaca becomes the capital of the Kingdom of Aragon in 1035, the pass of Somport becomes more important. Years later, this route began to be adapted as a pilgrimage route. This route comes from France, but in the Spanish section runs through the provinces of Huesca, Zaragoza and ends in Navarra, in Puente la Reina, where it joints the French Way.

This route is normally done in 6-7 stages. The first stage is the most complicated and the most beautiful by far. It starts from the height of Somport, in the Pyrenees, and border with France, at about 1600 meters of altitude. It goes down to the city of Jaca. The other stages do not present great difficulties. Although the number of pilgrim hostels is correct, its distribution is somewhat irregular and there are not many options to play with the distances of the stages.

The stage with more accumulated change of level is the first one, although practically everything is descent from the Height of Somport. From the city of Jaca the orography softens a lot, although we can find some minor slopes.

Summer is the best time, although it is quite hot. But in winter it is easy to find a lot of snow in the first stage, which may make it very difficult to walk. In spring there may still be a lot of snow or we may have difficulty waving a river, due to melting.

The signaling is good in general. In the stretch of Aragon, in addition to the yellow arrows, there are wooden poles, with a recorded shell. In addition, the route coincides with a long-route, which is marked with poles with the typical indicative of the GR, a red band and a white one. In Navarra, however, there are cairns with an arrow and a shell in them. Here we must be careful because we should not trust the orientation of the shells. You always have to follow the arrows.

The average distance between towns with pilgrim hostel is 9,5 km (March 2019). The distribution is somewhat irregular, with a lot of concentration in the first part of the route. Despite this, the route can be done in 6 or 7 stages. Most of the hostels are good but they are small and in summer, with the largest affluence of pilgrims, it is easy to get crowded.

The continuation to Santiago

El Camino Aragones ends in the town of Puente La Reina (Navarra) where it meets the French Way and through which you have to continue to get to Santiago de Compostela. See the Camino Frances

The weather is hot in summer and cold in winter. The first stage takes place in the Pyrenees, so the climate is very cold in winter with frequent snowfalls.

ITINERARY Camino Aragones
LIST OF TOWNS AND PLACES.
The towns through which the way passes, the partial km, the total km, wether there is a hostel, ... and download it for free in a PDF file !!!

STAGES PLANNER
Camino Aragones
Plan your way by choosing the section what you want to do and planning your stages. It's very easy: Select the section, choose your stages and then, download your stages planning and the complete itinerary of the chosen section for free !!!

STAGES PLANNINGS
Camino Aragones
Stage plannigs that can help you. Download the stages planning and the microguide for free!