[ OK ]
Santiago ways >> Camino Ingles
Santiago ways
El Camino Inglés
El Camino Inglés   (Ferrol - Santiago de Compostela)
Historical route of the pilgrims that came from England or the Scandinavian countries by boat. Beautiful and ideal to complete in 4 or 5 days. There is a branch of this route that departures from the city of La Coruña. 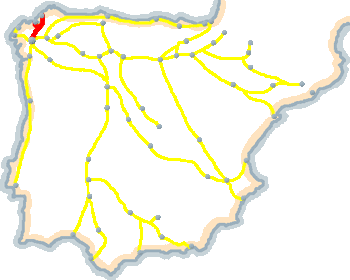 ITINERARY
Camino Ingles
The towns through which the way passes, the partial km, the total km, wether there is a hostel, ... and download it for free in a PDF file !!!

STAGES PLANNER
Camino Ingles
Plan your way choosing the section you want to do and your stages. Download your planning of stages and the complete list of locations of the chosen stretch for free!

STAGES PLANNINGS
Camino Ingles
Stage plannigs that can help you. Download the stages planning and the microguide for free!

The Camino Ingles, English Way, is called like this since it was the route taken by the pilgrims of the British Isles, of the Scandinavian countries, of Flanders, etc., who came by boat and landed in the cities of Ferrol or A Coruña. The first known pilgrimage dates from the 12th century when crusaders from northern Europe visited the sepulcher of Santiago before marching to the Crusades in the Holy Land. This route starts from Ferrol, just over 100 km north of Santiago de Compostela. There is a somewhat shorter variant that begins in A Coruña.

The English Way can be completed in 4 or 5 stages. In the last years pilgrim hostels have been opened in Betanzos, Presedo and Sigüeiro that, with other types of accommodation, allow us to better plan the stages according to the available days and our physical capacities. Before the opening of these pilgrim hostels, the number of hostels and their distribution forced to realice some very long stage to be able to complete the route in 4 stages. Now the distances of the stages can be balanced, making the path more comfortable in that sense.

The orography is steep but without large accumulated changes of level. There are a couple of steep slopes that have to be overcome, as for example from the entrance of the town of Pontedeume. From the town of Betanzos begins to gain height to the maximum level of about 420 meters.

The best season to do it is spring and summer. In summer there is the problem of the increasing influx of pilgrims. Although new pilgrim hostels have been opened, most of them are not of high capacity so in summer they can be easily crowded. During 2014 pilgrim hostels were opened in Presedo (12 km after Betanzos) and in Sigüeiro (17 km before Santiago). These new hostels, along with that of Betanzos (opened in 2013), are strategically located and greatly balance the distances of the stages, allowing for better planning. Now the average distance between towns with pilgrim hostels is about 13 km (June-2014). However, these pilgrim hostels are small and in the months of great affluence they can be crowded soon.

Regarding the other services, it is necessary to bear in mind always the purchase of some food in large localities since the bars, restaurants and shops of the small towns have very irregular schedules and we can not trust them to be open when we pass by there.

It is probably one of the rainiest routes, since it runs from the north coast of Galicia. In summer the temperatures are quite softer than in the rest of the Peninsula. It is essential to bring a rain coat or waterproof clothes.

ITINERARY Camino Ingles
LIST OF TOWNS AND PLACES.
The towns through which the way passes, the partial km, the total km, wether there is a hostel, ... and download it for free in a PDF file !!!

STAGES PLANNER
Camino Ingles
Plan your way by choosing the section what you want to do and planning your stages. It's very easy: Select the section, choose your stages and then, download your stages planning and the complete itinerary of the chosen section for free !!!

STAGES PLANNINGS
Camino Ingles
Stage plannigs that can help you. Download the stages planning and the microguide for free!