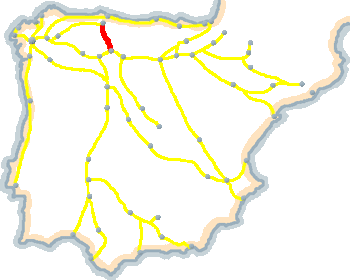 ITINERARY
Camino del Salvador
The towns through which the way passes, the partial km, the total km, wether there is a hostel, ... and download it for free in a PDF file !!!

STAGES PLANNER
Camino del Salvador
Plan your way choosing the section you want to do and your stages. Download your planning of stages and the complete list of locations of the chosen stretch for free!

STAGES PLANNINGS
Camino del Salvador
Stage plannigs that can help you. Download the stages planning and the microguide for free!

Oviedo was the capital of the Kingdom of Asturias from the ninth century. Being one of the few territories of the Iberian Peninsula that remained free of the occupation of the Muslims, a large part of the relics of other Christian territories were kept in its cathedral. With the advance of the Christian reconquest of the Iberian Peninsula, the capital was moved to the city of León, in the tenth century, so that Oviedo lost some relevance. However, it continued to retain important relics. Thus, when the pilgrims who came from the East of Spain and the whole of Europe came to León, many of them diverted to Oviedo to visit its Cathedral, dedicated to Jesus Christ the Savior, and all the relics it kept. It was said then that "Whoever goes to Santiago and not to San Salvador, serves the servant and not the Lord." Later, those pilgrims continued their march to Santiago by the route of the Camino Primitivo, Original Way. This route starts from the city of León, in the center-north of the Iberian Peninsula, and reaches the city of Oviedo, passing from south to north through the provinces of the same name.

The Camino del Salvador, Way of the Savior, can be carried out in 5 days. The stages are not very long but in some you have to overcome an important change of level, especially the section from the town of Buiza to Campomanes. There are some sections in which you have to walk on the shoulder of the road so you must be very careful.

As it can seen in the profile, the orography is complicated. Keep in mind that you have to cross the mountains that separate León and Asturias. From the city of León the road always tends to rise. From Buiza the route becomes more mountainous and spectacular. Already from Campomanes the profile is much softened, although from Mieres to Oviedo it becomes somewhat steeper.

The recommended season for this route is from spring to early fall. In winter and at the beginning of the spring it is easy to find snow in some mountain sections, so it is not recommended to make these sections at this time of year and even less alone. In case there is a lot of snow on the mountain, it is mandatory to take the Villasimpliz variant. Fog banks are also common. The number of hostels does not allow to play with the distances of the stages. The average distance between towns with shelters is approximately 12 km, so it requires good prior planning and a good knowledge of one's own physical faculties to face the orographic difficulties that we are going to find. However, this number of hostels, and their distribution, is enough to be able to do this Camino in 5 or 6 stages with balanced mileage.

In winter the weather of this route can complicate much its making, especially in the mountain areas due to the abundant snow. It is recommended not to do it alone and check frequently the weather forecast to be cautious. The northern zone, once the mountain pass has descended, is more humid, while the southern part of the route is drier. In summer, the weather is hot.

ITINERARY Camino del Salvador
LIST OF TOWNS AND PLACES.
The towns through which the way passes, the partial km, the total km, wether there is a hostel, ... and download it for free in a PDF file !!!

STAGES PLANNER
Camino del Salvador
Plan your way by choosing the section what you want to do and planning your stages. It's very easy: Select the section, choose your stages and then, download your stages planning and the complete itinerary of the chosen section for free !!!

STAGES PLANNINGS
Camino del Salvador
Stage plannigs that can help you. Download the stages planning and the microguide for free!