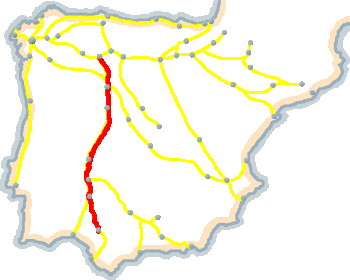 ITINERARY
Via de la Plata
The towns through which the way passes, the partial km, the total km, wether there is a hostel, ... and download it for free in a PDF file !!!

STAGES PLANNER
Via de la Plata
Plan your way choosing the section you want to do and your stages. Download your planning of stages and the complete list of locations of the chosen stretch for free!

STAGES PLANNINGS
Via de la Plata
Stage plannigs that can help you. Download the stages planning and the microguide for free!

The original route that would later be called "Vía de la Plata" was a route that linked the Roman cities of Emerita Augusta (present-day Mérida) and Astúrica Augusta (present-day Astorga). But it is thought the origins of this route are much earlier, as a traditional trade and cattle route. Despite its name (Via de la Plata can be literally translated as Road of Silver), this route was never a way for silver to be transported. Its name is thought to come from a phonetic evolution of the Arabic word "al-Balat" (the cobblestone path), which was how this road was known in the Andalusian kingdom. This route does not go directly to Santiago de Compostela but goes to the north of the Iberian Peninsula. It departures from Seville, in the south of Spain, to Astorga, in the North, passing through the provinces of Seville, Badajoz, Cáceres, Salamanca, Zamora and León.
From the province of Zamora, it is possible to take the Camino Sanabrés to walk towards Santiago.

The stages of this route are not complicated, although the hardness is determined by the length of the stages and, above all, because of the weather, which in summer is very hot, especially in the area of Andalucia and Extremadura.

The orography of this route is not complicated. We will not find great changes of level, except in the area of ​​the Sierra de Béjar, but with smooth ups and downs.

Undoubtedly, the best time to complete this Way is spring. In summer it is very hot, especially in the southern half, which requires great caution with sunstroke or heat stroke. More and more pilgrim hostels are being made that allow us to play a little with distances and be able to do not so long stages. The average distance between towns with pilgrim hostels is approximately 14.7 km.

The continuation to Santiago

To go to Santiago there are 2 options. The first is to deviate at Granja de Moreruelo (Zamora) and follow the Camino Sanabres . The other option is to finish the route of the Via de la Plata that ends in the town of Astorga (León) and where it meets the French Way, which must be continued to reach Santiago de Compostela. See the Camino Frances.

ITINERARY Via de la Plata
LIST OF TOWNS AND PLACES.
The towns through which the way passes, the partial km, the total km, wether there is a hostel, ... and download it for free in a PDF file !!!

STAGES PLANNER
Via de la Plata
Plan your way by choosing the section what you want to do and planning your stages. It's very easy: Select the section, choose your stages and then, download your stages planning and the complete itinerary of the chosen section for free !!!

STAGES PLANNINGS
Via de la Plata
Stage plannigs that can help you. Download the stages planning and the microguide for free!